Discussing the calendar can bring a “science and society” learning objective into the astronomy classroom.

Islam, for example, uses a lunar calendar. The resulting gradual drift of holidays and festivals such as Ramadan through the seasons opens discussion not only to the use of calendars, but also to the earliest observed crescent phase that marks the beginning and end of the fasting month.

Asking students to imagine, and then explain, how Ramadan differs when it is celebrated in different seasons, can give students a better appreciation for why seasons and calendars matter. When we discuss the lunar calendar, Muslim students often raise their hands to add stories of Ramadan, such as waiting for the first observation of the crescent moon that signifies the end of the fasting period.

A few years ago, a Muslim student, Kimi, would come to intro astronomy class wearing traditional attire and veil. Kimi was quiet until we reached this discussion of the calendar. She stepped in to talk about the meaning and practice of Ramadan. This talk, in turn, transformed the views of other students, and they welcomed hearing about her experience.

Later in the year, Kimi had some problems in her neighborhood. Her car was broken into, and her door was vandalized. Kimi stayed after class to explain that this was why she was late that day. Three other students waited to walk with her across campus and offer moral support. We do teach more than astronomy in the astronomy classroom.

Students find it surprising that the date of a long-ago event does not tell you precisely how many days ago it happened. This is due to the number of days in a year (365.25) not being an integer. A random error occurs because early calendars did not take the fraction of a day into account, so they needed adjusting once in a while. Students are often surprised to hear this.

For example, in 1582, when the calendar changed from Julian to Gregorian, 10 days were deleted: Thursday, October 4 was followed by Friday, October 15! The Gregorian calendar was invented to correct the systematic errors, so that the random adjustments were no longer necessary.

Explaining the Gregorian calendar is cumbersome: every fourth year is a leap year, except if it's a centennial. The only exception to this is if the centennial is divisible by 400. The effect can be difficult to visualize. 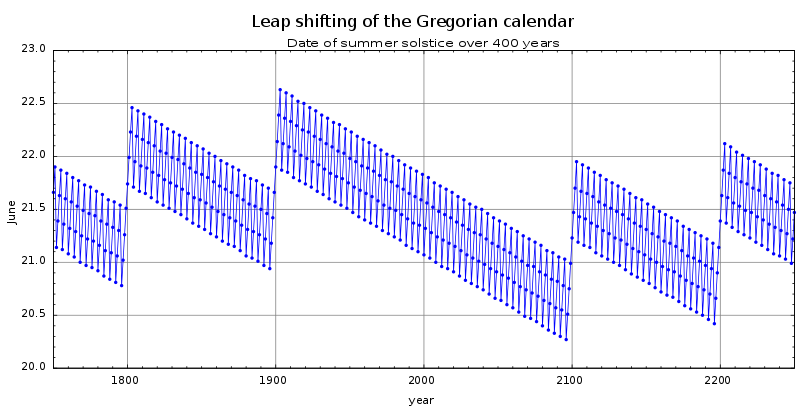 This graphical representation shows how the date of the summer solstice changes over the course of 400 years. This graph shows that the summer solstice moves 1/4 day later each year, until the fourth year, when it resets to, almost, the original date. As time passes, those almost errors accumulate, until they add up to just about one day after 100 years.

That “just about” error accumulates until it adds up to a full day after 400 years. And then the leap day is skipped.

Asking students to visualize how far the blue line would rise without the leap-year reset helps them understand that the date of the summer solstice would change significantly, by nearly a month, over the course of just one human lifetime. A visual representation of the effect helps students grasp a difficult concept with ease.

Sometimes, you do a thing in class, and you think, “Why did I never do that before?!” That happened to me this semester, when for the first time, I gave my introductory astronomy students a first assignment in vocabulary building.

This was basic, absolutely basic. I gave them a list of astronomical objects. Then, I told them to go to the library, look at an introductory astronomy book, and find a description of each object. The objects included: planet, meteor, comet, star, nebula, galaxy, and so on.

I asked my students to rewrite each definition in one or two sentences, and then to hand in their definitions in during the second class. I did not give my students anything “tricky.” No words like dwarf planet or energy.

The assignment was a simple census of the Universe: what’s out there, and how can we talk about it?

The assignment was a bit of a desperation move. Often, my students are not prepared for class on day one, but I hate to waste the opportunity to establish a good homework habit by waiting until the second week. This seemed like a nice compromise that would get them engaged with the material, even if they didn’t have their book(s) yet.

Most students did not go to the library (of course). But two of them did, which sort of shocked me. And all of them completed the assignment in its entirety. It took me only a few minutes to grade because every student gave reasonable working definitions of the objects. I was not looking for detail.

But since then, the real magic has happened in classroom discussion.

For many students, it’s been a long time since they thought about space, and they've forgotten a lot of what they knew. For another group, they never learned about these objects to begin with. And for others (the most difficult group), they think they know what these objects are, but they are mistaken.

In Utah, astronomy appears in the 3rd and 6th grade core. Therefore, unless their high school made a special effort to offer an astronomy class, my students may not have talked about space at all since 6th grade. That’s a long time to ask anyone to hold onto unused knowledge.

This semester, I’ve noticed the advantage of our common vocabulary when talking about physical laws. For example, when I talked about orbital motion, I was able to say, “These laws govern the behavior of all kinds of orbits, from planets to comets to stars orbiting the center of the galaxy to extrasolar planets. We will use these laws over and over again.”

And students had an idea, from the census that they took in their vocabulary assignment, how broadly I was applying those laws. The feedback from students -- in the completely non-scientific form of nods -- was more positive than past feedback had been.

Before, I felt that my students were not sufficiently amazed by the universality of physical law. Now that we have a common vocabulary in place, I sense that they better understand my own amazement, and that in turn helps them develop a deeper appreciation for our Universe.