Home Archives Profile Subscribe
Reading Astronomy News: Astronomers Spot One of the Oldest Stars in the Entire Universe
How-to: The Last Choice, A Questioning Strategy for Your Astro 101 Lecture

As of this writing, InSight has just landed successfully on Mars!  This mission is a little bit different from other recent missions: InSight (short for Interior Exploration using Seismic Investigations) is a lander, not a rover. Because it’s in the news, this is a great opportunity for a brief in-class discussion! 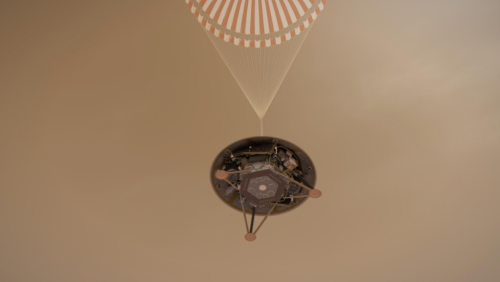 This illustration shows a simulated view of NASA's InSight lander descending on its parachute toward the surface of Mars. Credits: NASA/JPL-Caltech

InSight is designed to investigate the interior of Mars: the crust, mantle, and core.

A seismometer will measure surface vibrations, which will be used to determine the size of the core, the thickness and structure of the crust, and therefore the thickness of the mantle as well. These same measurements will be used to measure how frequent and how powerful the tectonics are on Mars, as well as the frequency of meteorite impacts.

Radar soundings back and forth to an orbiting spacecraft will be used to measure the wobble of Mars on its axis, which in turn is affected by the structure and composition of the core.

The InSight lander is the result of many technical advances. It’s the first lander to pick up and place instrumentation from the top of the lander onto the surface of the object being studied.

The plan is for InSight to place its seismometer on the surface of Mars, then place a heat and wind shield directly on top of the seismometer. The lander needs to make these placements autonomously, something that has never been done before.

In another major technological advance, InSight arrived on the Martian surface through a complex series of steps involving parachutes and retrorockets. The successful operation of these kinds of tools is a pre-requisite for future human exploration. Just InSight's successful landing represents a major step forward in the study of Mars. 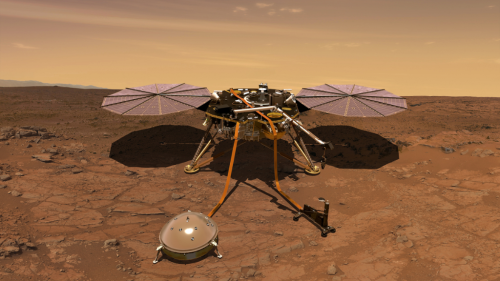 An artist’s rendition of the InSight lander operating on the surface of Mars. Image Credit: NASA/JPL-Caltech

Discussion questions for students may be wide-ranging:

And here are some quick “Google It and Think” questions for small groups: