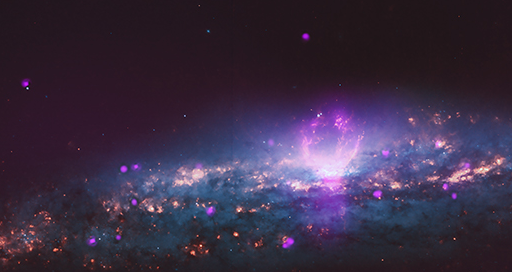 It’s that time of the semester when we are talking about galaxies, galactic structure, and supermassive black holes. Fortunately, Chandra has our back and has released a new image of a superbubble in NGC3079. The picture is sufficiently spectacular that I want to let you know about it right now!

Answer: The X-ray image contains mostly just point sources, as well as two larger fuzzy patches. One of these fuzzy patches is shaped like a ring. The optical image, however, shows the entire galaxy, including dark lanes of dust and gas and bright light from stars and emission nebulae.

2. How big are the superbubbles, compared to the diameter of the disk of the Milky Way Galaxy?

Answer: A high energy positively charged particle traveling through space. Note: they will have to click through to find this answer, if they don’t already know it! Let’s encourage that behavior!

4. Humans also accelerate particles, in particle accelerators, funny enough. How much more energy do the particles in these bubbles have than those accelerated by humans?

Answer: These particles have 100 times more energy than those in particle accelerators.

5. Run your mouse over the composite image to see it with labels on it. Why do astronomers think these superbubbles are associated with a supermassive black hole?

Answer: Because they are located together in space.