Reading Astronomy News: ESO Telescope Reveals What Could be the Smallest Dwarf Planet yet in the Solar System 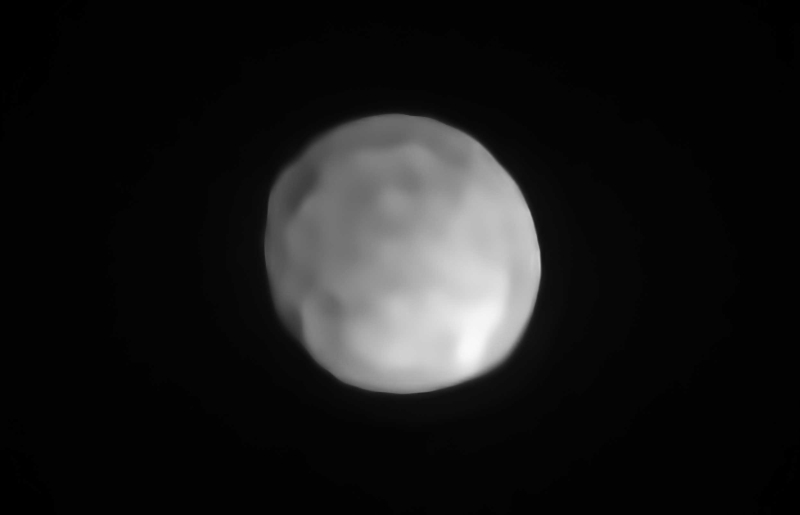 According to this article by the ESO, Hygiea has been imaged by ESO’s VLT. It is round, which makes it a dwarf planet rather than an asteroid. Smaller than Ceres, it is now the smallest known dwarf planet in the Solar System.

1) Study the image of Hygiea at the top of the article. The image of this tiny object is a little bit fuzzy, despite the powerful telescope used to obtain it. Nonetheless, some features are visible. Describe the surface of Hygiea.

2) Until this image was taken, astronomers were not sure whether to categorize Hygiea as an asteroid or a dwarf planet. Which criterion for dwarf planet status could be determined from this image?

Hygiea has enough gravity to pull itself into a round shape.

3) The article compares Hygiea’s size (430 km) to that of both Pluto (2400 km) and Ceres (950 km). Roughly how many times larger are these other dwarf planets than Hygiea?

Ceres is a bit more than twice as large, and Pluto is about six times larger.

4) Describe the origin of this dwarf planet, in your own words.

A much larger planetesimal collided with a smaller one about 2 billion years ago. The explosion created 7,000 asteroids, at least one of which had enough gravity to form a dwarf planet.