Classroom Resources: Using Animations and Simulations in an Online Course

Sometimes, “learning by doing” requires the use of a model or a simulation. It’s not possible for students to go into space far above Earth’s North Pole, or to change the mass of a planet and see how it affects the behavior of the central star.

There are loads of simulations and animations available online. So many, in fact, that it can be bewildering to find what you need, and it can be even more complicated to troubleshoot technology to figure out why one of your students can’t access the resources while another can’t see all the buttons.

Gradually, we’ve been working to create a stable set of straightforward simulations and animations that support the Exploration activities at the end of every chapter of Understanding Our Universe and 21st Century Astronomy. Many of these Explorations are guided inquiry experiments that use one of the interactive simulations or animations.

For example, in Chapter 12, students are guided through an investigation of the H-R Diagram using an interactive graph. When students move the cursor along the track of the evolution of a low-mass star, they can predict and then see the changes in the star. This helps them develop an intuition for the properties of stars in different regions of the H-R Diagram, and helps them learn how stars like the Sun evolve after they leave the main sequence.

Explorations using simulations or animations have pre-built assignments in SmartWork that include hints for difficult questions, and prompt students to explore the interactive graphs in more detail. It’s easy to assign these activities as a unit or as individual questions. You could also write your own questions in SmartWork or in your LMS (such as Canvas), which reference the simulations or animations that your students access through SmartWork.

I didn’t have “online teaching in a global pandemic” in mind when I created this feature. It was “just” something that I did with my classes when I had the luxury of teaching in a tech-enabled classroom. But I routinely assign Exploration activities as part of my students’ online homework. And I suspect I’ll be doing even more of this over the next few semesters!

My favorite way to use Reading Astronomy News is to prompt classroom discussion. The articles at the end of the chapters are short enough that students can read them in less than ten minutes—if they forget to read one before class, they can read it at the beginning of class—and the questions are open-ended enough to spark engaging discussions about other topics that students have been reading about.

I find that if I have a classroom discussion once or twice near the beginning of the semester, I can sometimes regret it. Because then the rest of the semester is full of “Dr. Palen, did you read the Internet thing about the space thing that the telescope saw?” Or other similar types of questions that are, more or less, just like the first one. I almost never know what they are talking about.

Unfortunately, classroom discussions are not what they used to be. While it’s possible to have a meeting on Zoom, a “discussion” really does require everyone to be able to see one another so they can be polite and wait for someone else to finish speaking, and so they can also see the body language that means “That was a joke!” or “I’m taking a risk by speaking up.”

In the latter half of our semester, when we were teaching online, I moved my Reading Astronomy News assignments into the online SmartWork homework system. Each article is available in SmartWork and has a pre-built assignment with a handful of questions asking students to evaluate what they’ve read given the context of the chapter material. I assigned some of these pre-built assignments during the last six weeks of class.

I don’t really know how well this worked. Certainly, students did the assignments and answered the questions. And they did a good job, too. However, it was deeply unsatisfying to me because I did not get any insights into how they were thinking about what they read. My goal with this feature and these assignments is to help students learn to read the news critically, and it’s hard for me to know how well they’re doing this without talking to them. It was beyond me, in the chaos of the transition, to craft questions that asked students to connect what they were reading to what was happening in the world.

Over these next few weeks, I’ll be thinking about how to get the same benefits of a face-to-face discussion without having to meet individually with small groups of students over video conference. Certainly, there are technological capabilities (break-out “rooms” in Zoom, for example) that I don’t fully comprehend yet. I’ll need to find some fellow faculty members or former students to be my “guinea pigs” while I figure out how well this works…

This is a perfect time to investigate the chapter-opening figures in the third (or fourth) edition of Understanding Our Universe. The first two pages of each chapter feature an activity that students can do at home with items they have around the house. While I did not have a global pandemic in mind when I wrote these activities, I sure am glad to have them now. I wasn’t thinking that students would not be able to acquire additional tools…I just thought that they were more likely to actually do the activities if they didn’t have to go to the store first.

Half of these activities are observing assignments, such as observing the night sky with the aid of a star chart found in the appendices at the back of the book. It occurs to me that students might enjoy being reminded of these star charts as something nice for them to use in the evenings!

The other half of these activities are experiments or models. For example, students can explore the expanding universe using rubber bands and paper clips, and they can learn about thermal equilibrium using a couple of ice cubes and a few glasses.

For example, one of my favorite activities is the melting-ice-cubes activity from Chapter 17. It very clearly demonstrates that it’s easier for spaces in direct contact to come to thermal equilibrium. Connecting this experiment to the horizon problem requires students to think a little bit about what it means for different regions of the universe to be “connected” or “separated.” Asking them to take a picture of the cups and mark the hot and cold areas makes the cosmic microwave background more concrete, and it creates something swiftly grade-able that ensures that students have done the assignment!

As I plan for online teaching through the summer, and possibly into the fall, I’m working these activities into my course plan more formally than I have in the past. I’m also devising new ones to include throughout 21st Century Astronomy. I’ll be test-driving them over the next year or so. Let me know if there’s a particular topic you’d like to see! 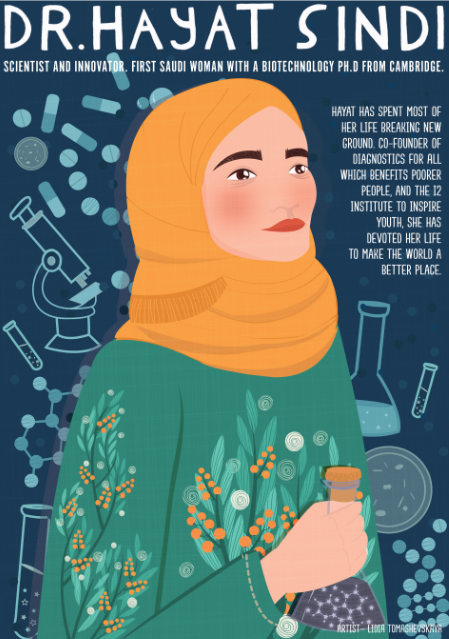 This set of nifty (free!) posters came through my inbox over the summer. We printed some of them to hang around the Physics Department, and the College of Science more generally. 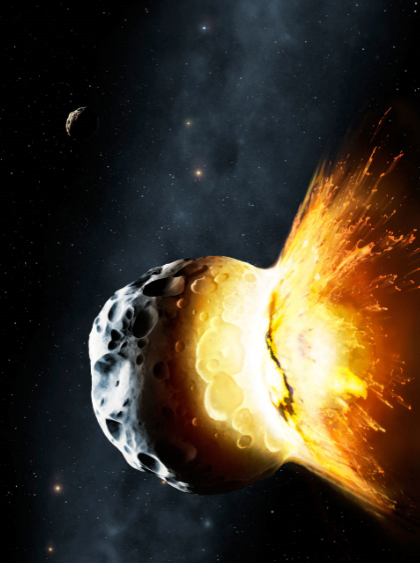 Summary: Hayabusa2 has been investigating the asteroid Ryugu. This is a sample-return mission, which has implications for Solar System formation and may cast light on the origins of life on Earth.

1. Consider what you know about the origin of the Solar System. What are astronomers hoping to learn from Hayabusa2’s mission to Ryugu?

Answer: They are hoping to learn about the composition of matter in the Solar System when it formed. This could confirm or refute our ideas about Solar System formation and the formation of the asteroid belt. The precursor molecules for life are also present on the asteroid, which may give us clues about the origins of life on Earth.

Answer: The spacecraft approached the surface and shot a small projectile into the asteroid. A sampler horn collected the kicked up dust and the spacecraft moved on. This is not quite what’s implied by the summary sentence in the news article.

3. Ryugu is less than a mile across, in an orbit between Earth and Mars. Using an average orbital radius between those two planets (1.25 AU), find the orbital period of Ryugu. Convert this orbital period to seconds.

4. The circumference of Ryugu’s orbit is 1.2 X 1012 Divide this distance traveled by the period to find the speed of the asteroid in its orbit. This is the speed that Hyabusu2 must be traveling in order to rendezvous with the asteroid.

Answer: This is a reminder of the definition of the properties of an orbit (what is the circumference, and what is the period). The speed is 32,000 m/s.

5. When was the spacecraft launched, and when is the sample return mission expected to arrive back here on Earth?