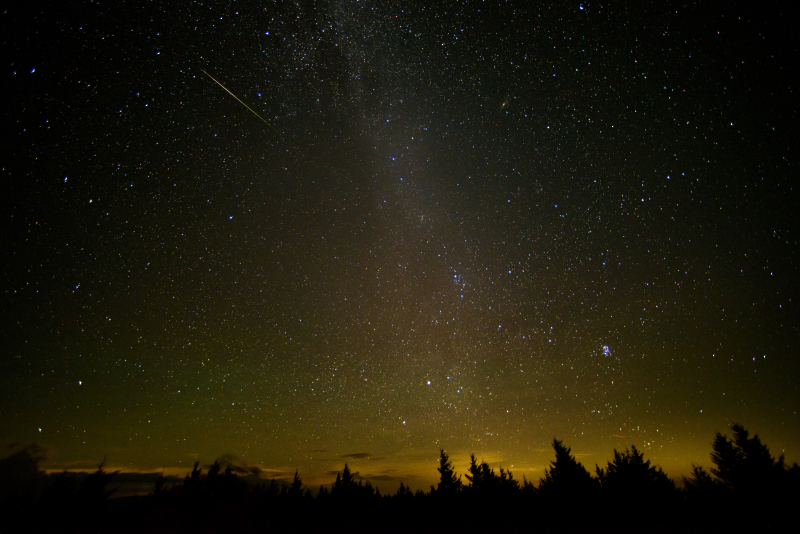 Don’t forget to remind your students to watch for the Lyrid Meteor Shower this month. The peak occurs around April 21-22.

This meteor shower comes as Earth passes through the debris left behind by Comet Thatcher. Particles lost from the comet continue to drift in the Solar System, gradually changing their position.

As Earth moves through space, it passes near the trajectory of the comet and runs into collections of these particles. This will happen repeatedly at particular times of the year as Earth returns to the same point in its orbit. The particles burn up, creating meteors as they fall through the atmosphere.

Comet Thatcher has a 415 year orbit, so it is a long-period comet. It will not be back in the inner Solar System until 2276.

To watch a meteor shower, go to a clear dark site where the horizon is not obstructed. Spend about half an hour in the dark, without your cell phone or other bright light in view. This will allow your eyes to adapt to the dark. Then just watch for meteors! They are best seen with the naked eye.

If you are careful and methodical, your observations can contribute to the study of meteors and meteor streams! To learn more, visit the Astronomical League’s Meteor Observing Program website.

LIGO has been busy, and a newly released graphic summarizes many of the exciting discoveries the detector has made in concert with Virgo, its European counterpart.

Summary: Since 2015, the LIGO/Virgo collaboration has detected gravitational waves—ripples in spacetime caused by rapidly accelerating massive objects—from 10 stellar mass binary black hole mergers and one binary neutron star merger. Black holes and neutron stars are both forms of stellar remnants—the final stage of stellar evolution that a star enters when it has burned through its entire fuel supply. This graphic provides a great jumping off point for discussions about masses in the stellar graveyard.

1. Consider the final masses of the black hole mergers (larger blue circles). What is the smallest merged mass?

2. Consider the masses of black holes that have been detected in X-rays (EM Black Holes, in purple). What is the largest black hole mass that has been detected this way?

3. Estimate the average mass of the black holes that have been detected in X-rays.

4. Estimate the average mass of the black holes that have been detected in gravitational waves.

Answer: This average looks to be about 25 solar masses.

Answer: Even though the two groups of black holes overlap in mass, gravitational waves are detecting more massive black holes, on average, than were detected with X-rays in the past.

Answer: LIGO/Virgo has nearly doubled the number of black holes that have been observed.

7. Is it reasonable, then, to compare the two populations (the pre-merger black holes from the LIGO/Virgo data and the X-ray black holes)?

Answer: Yes, statistically speaking, we know of about the same number of objects in each case.

8. Consider the masses of Neutron stars (yellow). What is the largest neutron star mass that has been detected with light (EM)?

9. Consider the masses of Neutron stars (yellow). What is the average neutron star mass that has been detected with light (EM)?

10. Theorists predict that we would not expect to observe neutron stars with masses above about 2.14 solar masses. Are these observations consistent with that prediction? What do you think astronomers are wondering about the post-merger object resulting from the merger of two neutron stars?

Reading Astronomy News: The Little Spacecraft that Could: the Kepler mission is over.

Summary: The Kepler mission, after at least one resurrection, has finally come to an end. During its 9.5 year “lifespan,” Kepler discovered more than 2,500 planets around other stars and changed our minds about how common planets actually are.

1. Study the graph of Exoplanet Discoveries. The yellow dots show all the planets discovered by Kepler. Compare the sizes of these planets with those discovered before and after Kepler.

Answer: Kepler discovered smaller planets than those discovered before or after.

2. Study the graph of Exoplanet Discoveries. This graph shows that very few planets have been discovered with orbital periods smaller than one day. Why might this be?

Answer: This is as close as a planet can get, even to a small star, and still be in a stable orbit.

3. Study the graph of Exoplanet Discoveries. This graph shows that few planets have been discovered with orbital periods larger than about 300 days. Why might this be?

Answer: This could be a selection effect. Kepler uses the transit method to detect planets, but planets with large orbits are much less likely to cross in front of the star; our line of sight must lie exactly in the plane of the orbit to see the planet transit. The idea that this is a selection effect is supported by the observation that planets with long periods have been detected by other methods (the blue and gray dots), but not by Kepler.

Answer: This percentage appears to be close to 100%. “…astronomers have used Kepler’s exoplanet haul to predict that every one of the hundreds of billions of stars in the Milky Way should have at least one planet on average."

5. Comment on the impact of the Kepler mission on the Drake Equation.

Answer: The second term in the Drake Equation is the fraction of stars with planets. This term is now quite likely to be nearly one, whereas before the Kepler mission, its value was only speculative.

Reading Astronomy News: Astronomers Spot One of the Oldest Stars in the Entire Universe

Summary: A red dwarf star in the Milky Way barely contains any heavy elements at all. Its age is estimated at 13.5 billion years.

1. Why does the lack of heavy elements imply that the star formed very soon after the Big Bang?

2. Why do astronomers think there must have been at least “one ancestor” before this star formed?

Answer: Because it has some heavy elements in it.

3. How is the birth of this small star connected to the first generation of stars, which were probably ALL very massive?

Answer: Supernova explosions from those first stars could trigger the formation of smaller stars.

4. Where would this star lie on an H-R Diagram?

Answer: This star, because it is a very small red dwarf, would lie at the lower right on a H-R diagram.

6. Astronomers can confidently state that all stars like this one (with similar mass) are still around, and none have died yet. Why can they state this so confidently?

Answer: Because 1 trillion years is a lot longer than the age of the universe.

In September of 2018, Jocelyn Bell Burnell won a $3 million prize in recognition of her outstanding discovery of pulsars. This article presents an opportunity to link science and society while recalling and applying information about radio telescopes, the motion of the sky, and pulsars.

Until the result discussed in the article linked below, only two distinct neutrino sources were known: the Sun and Supernova 1987a. Now there is a third: a distant blazar.

This article complements material about active galactic nuclei, neutrinos, scientific instrumentation, and the process of science. Following are some questions that I thought of as I read the article. Share your own (with answers!) in the comments.

Here is a nice little article from NRAO that corresponds to material in Chapter 13 of Understanding Our Universe and Chapter 18 in 21st Century Astronomy: https://public.nrao.edu/news/neutron-stars-fall.

What other questions would you ask your students, based on this article? Feel free to leave suggestions in the comments!